It can happen in the blink of an eye: one moment, your daughter is playing with her Disney princess dolls and then when you look again, she’s donning punk band tees and talking to her friends on your phone every five minutes. Your daughter has become a pre-teen and is experiencing everything that comes with it. This stage of her life will be rough for both of you, but with a little know-how, you’ll both come through the other side with a stronger bond.

You want your pre-teen to bring up her grades, keep her room spotless, and remember to feed her hamster, but chances are you won’t see improvement in all three areas. Instead, focus on what’s important and what you believe is the most important in the long run. The rest will come with maturity.

While an icy cone of silence may have descended around your teen since she turned 12, chances are that she wants to open up to you but thinks you won’t understand. When you’re frustrated with her behavior, instead of shouting, talk with her and share your own experiences. This may help her to see that you do understand what she’s going through.

Let Her Have Her Own Space 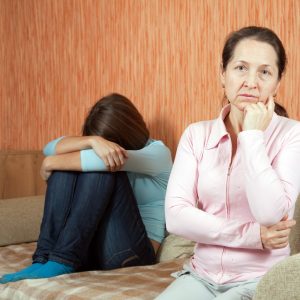 You may want to show your daughter you’re interested in her music or movies by learning about them, but don’t overdo it. Let her talk about them with you or ask a few questions to get her to open up. Trying to be a fan of something for your daughter’s sake will only embarrass her.

When you’ve reached your boiling point, walk away for a few moments before you speak again. At this point in your pre-teen’s life, words can have a profound impact on their self-esteem. Saying things like, “I can’t believe how stupid you’re acting,” or “You’re so lazy!” will only make them believe exactly that.

When your pre-teen goes to bed at night, make sure that all electronic devices are shut off and put away so she goes to sleep instead of staying up and texting her friends. When she’s had enough sleep, she’ll be more cooperative and will do better in school. Make sure you impose a regular bedtime and enforce it.

Recognize She Will Test Boundaries

When your daughter was a toddler, she constantly tested boundaries. Now that she’s a pre-teen, she will do the same. Recognize that but at the same time, you must be her parent, not her friend. Let her know there are some lines she won’t be able to cross.

Try not to focus on the negative all of the time. When your daughter is cooperative or does well in school, be sure to recognize that behavior as well. This way, she knows that you’re proud of her and that she’s capable of earning that from you. When the storm of adolescence passes, your daughter will look back and realize what a positive influence her mother really was.