How to Impress His Parents

It’s time to meet the parents and you want this to go really well. After all, if his parents don’t like you, you’ll find it much harder to live with him later on. You want both sets of parents on side and helping when necessary during the whole relationship. So, you want to impress without going overboard. Here are some tips.

Be Honest With Them

There is such a thing as over-sharing, but you want to be honest with the smaller stuff. For example, don’t lie about the past you’ve come from or your age. These things will catch up to you in the future. You may be embarrassed about that care home past, but it helps his parents trust you and understand your fears and thoughts more. They also know you’re less likely to hurt him.

Think About Your Clothes

You want to look smart but casual at the same time. Avoid wearing that short skirt or cleavage showing top. Your boyfriend may love it, but his parents really won’t. They want to imagine their son as the innocent boy who grew up with them. Try a smart pair of trousers and jumper, or you could opt for a longer skirt with a smart round neck top. 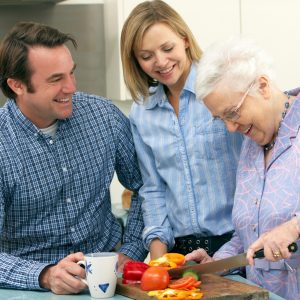 You’re not going out for a night out, so you want to keep your face as makeup free as possible. If you have bad skin, this may not be that easy as you may prefer to have a bit of concealer. If you need something, have a small layer and maybe some mascara. There is no need for the deep lines of eyeliner or the smoky eye look with the eye shadow. It just gives them a bad impression.

Show Some Interest in Them

Show that you are interested in them and what they do. They may have boring jobs in your opinion, but those jobs could be something they absolutely love. When they ask you about your boyfriend’s plans — or the plans they think he has — for life, act supportive and encouraging. When it comes to food, compliment whoever cooked.

Let Them Know of Food Aversions or Allergies

You don’t like everything when it comes to food; nobody does. Don’t feel like you have to pretend to like something just to make his parents like you. They’d prefer to know that you’re not over keen on something before putting their heart and soul into a meal. If you are allergic, make sure you tell them about this too. Do it in advance before you go around for a meal. If you’re really nervous, make sure your boyfriend lets them know.

Be Positive About Your Job

2014-01-31
Previous Post: How to Enjoy a Valentine’s Day on a Budget
Next Post: 6 Tips to Get Rid of Those Weight Obsessions