Celebrating the Fall – Creating Autumn Potpourri For the Home

The wonderful scents of autumn include things like cinnamon, apples, and spice. However, a woman that wants to capture these scents for her home can do so by making her own potpourri. By using a few ingredients around the home, a woman can create a wonderful potpourri that can last for the autumn and beyond.

Ingredients that will be needed:

Other supplies for creating the potpourri:

A woman is going to need to use a tool like a hammer, a paper bag, a Ziploc bag, dried flowers and leaves, a glass jar, and a pair of scissors.

Start by placing the ingredients in a paper bag:

Place cinnamon sticks and nutmegs into a paper bag. The hammer is going to be used on top of the paper bag, so it is important that the bag be as thick as possible, maybe even using two small paper bags together may be a good idea for extra protection. 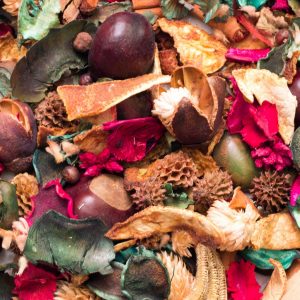 Dried flowers and leaves are mostly for decoration, and should be placed into a large glass jar with a lid.

Break up the ingredients:

Using the hammer, the paper bag should be pounded on a hard surface like a table or countertop. The bag should be a kept as flat as possible so the broken pieces of the cinnamon sticks and nutmegs do not puncture the bag and create a mess.

Cut the vanilla beans up:

Using a pair of sharp scissors, cut the vanilla beans up into large chunks. Remember, when it comes to scent, vanilla beans are quite potent especially if the beans are cut up into small pieces.

Place everything in the glass jar:

The broken pieces of cinnamon stick, nutmeg, and the cut vanilla beans should all be placed in the jar with the dried flowers and leaves. The jar should then be sealed using the lid, and it should be air tight.

Once the jar is sealed, the potpourri should be left to sit for about two to six weeks. The time will give everything in the jar time to age. The best place to put the jar is on top of the fireplace mantle, where it can age undisturbed, and also the fall colors inside the jar will be visible to everyone that enters the home.

The longer the potpourri sits undisturbed, the more potent the scent will be when the jar is finally opened. Once enough time has passed, the jar can then be opened, and the wonderful scent of autumn can quickly fill the home. There are various ways that the recipe can be altered such as using orange peels, pieces of dried apple, and even a small pine cone to add a hint of pine to the mixture.

2013-09-06
Previous Post: Choosing Your Bridesmaids: Who Should Be Your Main Girls?
Next Post: Get What You Want in the Bedroom