Things to Avoid Doing During an Argument

Arguments are common between couples. You’re not going to agree on every little thing, and there will be days that you’re irritable and hormonal. It is how you act during and after that will determine whether the argument leads to another one. There are certain things that you need to avoid doing during and after an argument.

Walking away shows that you’re not really interested in his feelings. While you may be doing it to collect your thoughts, it doesn’t come across that way to him. When he feels you’re ignoring him or not interested, he will start to resent you. How does he know that you will care about his feelings at other times? There are times both of you need to walk away, but you also need to listen to each other.

Giving him the silent treatment is a way of punishing him, but that’s not a good thing. Even if you think he is in the wrong, you need to communicate with him. This is where many couples fall short. By communicating, you’re listening to him and he is more likely to talk to you. This prevents future arguments over the same thing, which could lead to a breakup. 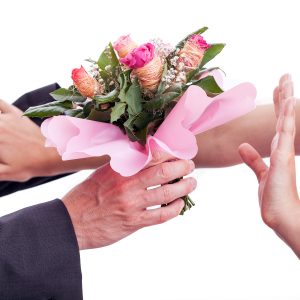 “I’ve had a bad day” or “the kids have been a nightmare” are no reasons to start a fight with your husband. He will resent the fact that you are taking out your frustrations with them on him. He is not your punching bag or sound board to get annoyed it. If you regularly find that frustrations from other parts of your day cause arguments at home, you need to learn how to deal with them. You can’t keep using them as an excuse to keep doing it.

Not Letting Him Revisit Something

Arguments are over and done within a few hours. There are times that you will need to revisit it once you have both had time to think. However, make sure you do let him revisit an argument when he is ready. If you push him away or stop him from talking, it’s another sign that you are not interested in his feelings. If you’re not quite ready, you can tell him that and as to revisit it when you’re both at a point that you can.

Bringing Up Past Arguments

This is a big no-no. Never bring up things that he has said in the past during this new argument. He thinks that those words are in the past, and they won’t be used in the future. He doesn’t collect everything you’ve said to use it against you.

Focusing on the Reason for the Fight

2013-12-30
Previous Post: Top Marriage Fears You Don’t Need to Have
Next Post: Things You Don’t Want to Say to a Dieting Friend